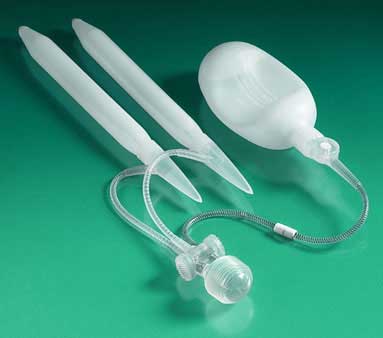 Penile prosthesis, a malleable or inflatable device is a treatment option for men with erectile dysfunction. A simple prosthesis contains a pair of expansive and malleable rods that are implanted surgically within the erection chambers of the penis that makes the penis semi-rigid so that it merely requires lift or adjustment to attain erection to initiate sex. Nowadays, many men choose an inflatable, hydraulic prosthesis, that allows to achieve erection whenever it is chosen and is quite natural easier to conceal. A penile implant is usually applied when during a clear medical need for ED and when the problem cannot be resolved naturally or with any other medical therapy. Sometimes penile prosthesis implanted at the time of surgery for reconstruction of the penis in patient's with Peyronie's disease.

How Does the Penile Prosthesis Work?

The expansive penile prosthesis consists of two cylinders attached -- a pump and a reservoir -- which are surgically placed in the body. The two cylinders are implanted connected inside the penis by tubing to a separate reservoir of fluid. The reservoir is inserted under the groin muscles. A pump connected to the system placed between the testicles, under the loose skin of the scrotal sac. 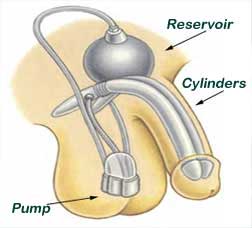 Can Prosthesis be noticed?

While a small surgical scar at the bottom where the penis meets the scrotal sac can be visible to the patient who have undergone prosthesis surgery, other people probably will be unable to tell whether the man has an inflatable penile prosthesis.

With prosthesis the inflated penis becomes stiff and thick, which is quite similar to a natural erection. Although most men rate the erection to be shorter than their normal one; however, new models comprise of cylinders that may increase the thickness, length and stiffness of the penis.

Penile prosthesis does not change skin sensation of the penis thereby not affecting a man's ability to reach orgasm and erectile. But once a prosthesis of the penis is done, it may however, destroy the natural reflex of erection. It was found that men usually cannot attain an erection without implant inflation. On removing the implant the person may fail to have natural erections.

Effectiveness of the Implants 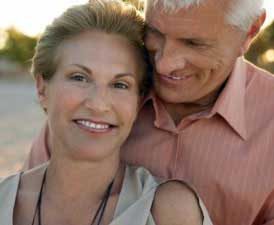 It was reported that about 90%-95% of prosthesis implants help achieve erections quite suitable for intercourse. Rates of satisfaction in patients with inflatable prosthesis are very high, and 80%-90% of men are very much satisfied with the outcome and prefers to choose the surgery again. Penile modelling over an inflatable prosthesis of the penis is an emerging technique for patients with severe Peyronie's disease. Reliability of implant reliability is excellent with low postoperative morbidity.

An infection, which is a serious complication has been found to occur in 1 to 3 percent of cases. This is a major cause of concern as elimination of the infection requires no removal of the prosthesis. Also erosion occurs in few people on the protrusion of some part of the prosthes outside the body. Erosion often causes infection that needs frequent removal of the device.

Sometimes mechanical failure is associated with inflatable prosthesis which is less common with a malleable or semi-rigid prostheses. Often leakage of fluid present inside the inflatable prosthesis the body may occur; however, it is not of major concern as these prostheses consists of normal saline that is safely absorbed. Prosthesis replacement surgery is necessary after mechanical failure if a man urges to remain sexually active. Nowadays following implantation 3-component inflatable penile prostheses have about a 10 to 15 % possibility of failure in the first 5 years.

The Cost of Penile Implant Surgery

Depending on your geographical region, your choice of surgeon, implant type and placement, in USA the average cost of penile implant surgery is between $16,000 and $20,000 is too Costly; this procedure may be covered by insurance. but in India all procedure done around at $8,000 to $12,000 with all accommodation. 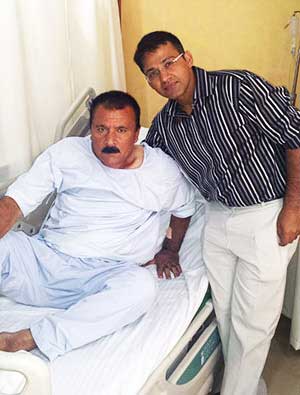 Hello, I am Darwish from Iraq, I am 56 years old and I am a diabetic and I was suffering from Erectile Dysfunction for last 7 years. Initially I thought not to speak to anybody about this condition, but finally I decided to discuss it with one of my close friends. He immediately suggested me to meet his urologist. We went to see him the other day and he prescribed a sildenafil. It did work for a few days but not upto my expectations. Then the urologist advised me to go for Penile injections. I would say Injections worked best for me, I got very strong and hard erections, but over the period the body stopped responding to injections as well. So, I started looking for a more permanent solution. My urologist had told me about Penile Implants but I was not sure about the outcomes of the surgery.

I started searching about Penile Implants online and then I came in contact with EDTreatment India. They helped me find all the necessary information related with Penile Implants and they answered almost all the questions I had in my mind. I decided to go to India for the surgery. After reaching the hospital they checked my blood sugar level which was a bit high. Hence my stay was extended for 2 more days. The surgery went well. I did feel discomfort during initial days but it all went away after some time. It’s been 6 months now I am now enjoying a very healthy sex life and most importantly I can now fully control the erection as long as I want. I would like to thank EDTreatment India and my surgeon for giving this new lease of life. Also I would suggest people suffering from ED, please talk to your urologist, please open up. There are solutions available, you just have to discuss with the right person.

Penile implants - How do they work